True or False: I don’t need a California gun liability policy. If someone breaks into my home in the middle of the night and I shoot them in an act of “self-defense”, my home insurance will cover me?

That’s a great question, and often, it’s never thought of until it’s too late. Most people assume, or simply don’t know that in order to have the best California Gun liability policy.

Guns. Guns are a polarizing topic to many people not just in California, but in the entire country. They are hot button topics during every political election, and are often the centerpiece for controversy whenever a tragedy strikes.

There are many who see “guns” as a problem. They will tell us and others that we have a “gun problem”. And that the “gun culture” that we have in America is a bad thing.

People have told us in the past that as a small business, we shouldn’t take a side on such a dividing, and controversial topics. These people probably mean well, and in most cases, they are probably right. However, when it comes to firearms, or self-defense, we believe, and are big proponents for the second amendment.

It should be assumed that if you’re still reading this article, you’re either 100% in agreement with our beliefs, or you’re diametrically opposed, and upset. So with that in mind, let’s talk a little bit about guns, their place in our society, and the need to protect yourself with a California gun liability policy.

First, some history to provide some context as to why we take this position. Many believe that the second amendment of the United States Constitution should have limits and that there should be some “common sense gun regulations”. The idea that if there are more gun laws, more regulations, and more government control, that it will decrease gun crime, and gun violence.

One former Vice President even remarked that “you don’t need an AR15” all you need is a double barrel shotgun. Politicians have remarked in the past that there should be more regulations on ammunition and firearms.

DISLAIMER: While the above video of former Vice President Joe Biden fits our content, the real reason it is included, is so that we can also have an excuse to post the following auto-tuned musical version.

The idea that the purpose of the Second Amendment was made to protect “hunters”, and that “responsible gun ownership” implies using a firearm only for “hunting or sportsmanship” is a deeply flawed interpretation of our Constitution. (start video at the 6:30 mark)

A well regulated Militia, being necessary to the security of a free State, the right of the people to keep and bear Arms, shall not be infringed. 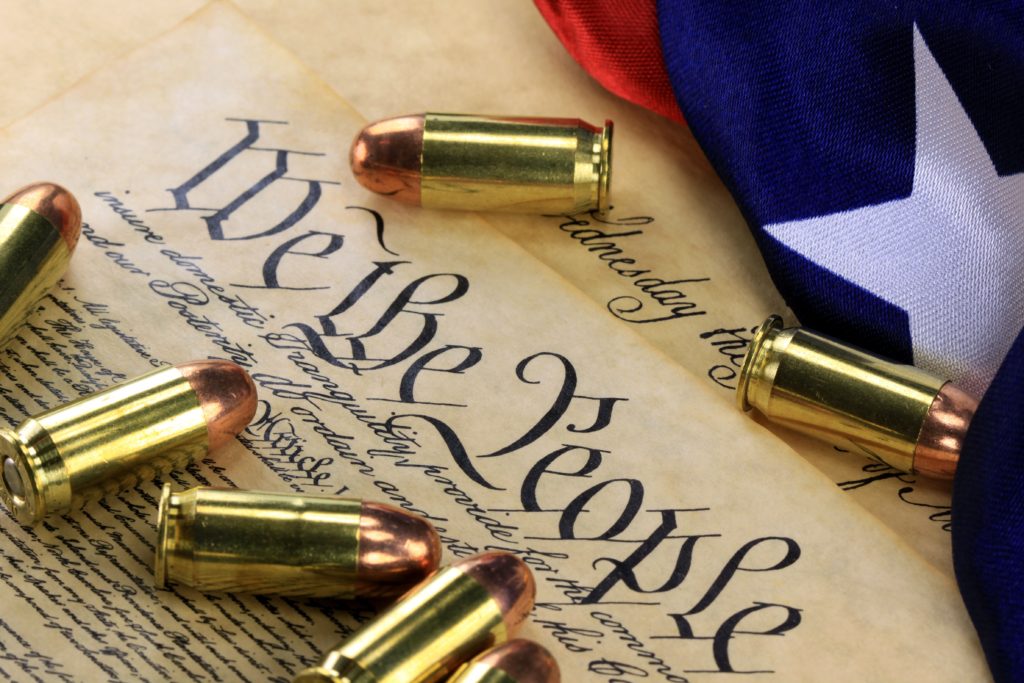 If you recall your high school US History class, you’d remember that the founders penned the Second Amendment right after they finished fighting a war for their independence. They believed that it was vital that it was the “right of the people” to bear arms for the security of the state. Meaning, they just fought against a tyrannical state, moving forward, if the state that they just founded ever crept into the same type of tyranny, it would be important to allow the “people” the right to protect themselves against such tyranny. The Second Amendment was not written for citizens to hunt for food, it was written to protect citizens from hunting tyranny. There is an important difference.

Now that history class is over, and the foundation is set, allow us to get back into the conversation of what we’re talking about.

To answer the TRUE or FALSE question at the beginning, the answer is….FALSE!

There is a very good chance and a high likelihood that your California home or renters insurance policy WILL NOT cover you in the event that you have to use your firearm, or any other type of weapon to defend yourself inside of your own home. In ordered to have coverage, you would need a separate California gun liability policy.

The image posted above is taken from an actual home insurance policy form known as an HO3. The vast majority of California homeowners have this same policy. If you carefully read the policy language of your current policy, you’ll see that “intentional acts” are excluded from coverage. Insurance companies have already set a precedent that says “if you pull a trigger, you intended on doing so”, and because of that, there is no coverage afforded to you.

“My insurance agent said I was covered”.

We hear this a lot. Well-meaning people who tell us that they were assured by their current agent that their policy WOULD cover them. Everyone is human, and everyone makes a mistake, (insurance agents included) We have taken the time to contact the claims and underwriting departments of many, many insurance companies, some small and regional, and some large and national companies who have either:

*Outright stated that there is no coverage

*Gave us a lot of legal jargon, and used terms such as “gray” and “undetermined”

If you find yourself in the position where you must defend yourself or your family, the last thing you need is to find out after it’s too late that there is no coverage afforded by your home, renters, or umbrella policy.

“If someone breaks into my home, how am I at fault”?

California is a unique state. It’s been true in several court cases, that if someone breaks into your home and hurts themselves, that they are now the victim. The legal system now sides with them, and the homeowner is now liable for any damages or injuries they encounter.

Because of our stance on firearms and freedom in general, we sought out to educate ourselves and find solutions to what we feel is the best way to defend yourself against a potential lawsuit. i80 Insurance Solutions is proud to offer California Gun Liability. We have partnered with the USCCA to offer self-defense liability products to our clients.

A California gun liability policy with the USCCA provides:

Even if you’re not guilty of committing a crime, that doesn’t mean you can’t find yourself in a civil suit. This is where this coverage comes in handy. It provides $1,000,000 in civil suit defense.

If you win your civil case, this coverage protects you in the event the judge wants to levy a damages judgement against you.

If your firearms or weapons are stolen and used in a crime, this policy would protect you against a lawsuit.

This policy will provide a “no-questions asked” attorney retainer to help you get your case off the ground. We feel this is a major differentiator over other products that offer less money. This will allow you to attract the best legal representation available.

Receive immediate cash to help get you out of a jail cell, and back to your family who were just a part of a horrible and scary event.

This allows you to have the best pro 2A legal representation in the event you are questioned by police, or if you have to face a Grand Jury.

After you call 9-1-1, you will want to call the Critical Response Team. They will help get the ball rolling immediately, they will pay the attorney retainer and post your bail.

* Wage Compensation While In Court Up To $500/day

Every day that you are away from your job defending yourself in court, this policy will pay up to $500 for wage compensation.

It goes without saying, that even if you have to defend yourself and family by firing your weapon at another person, that those events can take a traumatic toll on your psychological well-being.  This policy will help coordinate and pay for any post-shooting counseling to help you and your family get back to your daily routine.

It doesn’t have to be a firearm that is used. It could be anything that you use to protect yourself. The policy offers full self-defense liability.

The great thing about this coverage, is that unlike other insurance products, you won’t have to pay a deductible first before coverage kicks in.

*Family Covered In Your Home

Your policy does cover your spouse and everyone in your house under the age of 21. The only thing to consider is if your spouse regularly carries, they would need their own policy. In the instance that they do not carry, and they have to use your firearm, you can rest assured that there is coverage provided to them as well.

*Freedom To Choose Your Own Attorney

The policy will suggest reputable, and experienced 2A legal counsel, however, if you feel more comfortable using another attorney outside of the suggested circle, you are entitled to do so with no limitations on the coverage

There are other benefits to a USCCA membership, the ones listed above are what we see as the most crucial and thought of questions and benefits to having a standalone California gun liability policy.

The USCCA offers three membership packages. Due to the highly litigious, regulated and firearm contentious climate that we have in California, it is our strong recommendation that all California firearm owner’s posses the “Platinum” package. As a trusted independent insurance agency, our professional evaluation and opinion is that the strong coverage’s and options offered in the “Platinum” plan trump any other plan or option. It is for these reasons that we only offer this plan to our families, friends, and clients.

The benefits provided above are all held within the “Platinum” plan, and because there is only a $200 a year difference, we suggest it is a better value to only purchase that specific plan.

i80 Insurance is committed to protecting you and your family from financial devastation. While firearms remain a controversial topic here in California, and while many will advise us to not take a position, the fact remains, there are over 7 million registered gun owners in CA. It was estimated that Californians were on pace to buy 1 million guns in 2016

This blog post is not meant to cause a debate, it isn’t meant to divide, rather, we want our residents to know that there is a pro 2A insurance agency here in California that is dedicated to serving this large group of people with California gun liability and self-defense liability products.

Next Post: Why Do My California Car Insurance Rates Keep Going Up?

Call Email Change Quote
How Can We Serve You?
×
Send Message In App