Anytime that I have the opportunity to talk about the things I really love, I get excited and can hardly stop, just ask my wife. So when I saw the stories of college football stars Christian Mccaffrey and Leonard Fournette opting to sit out of their respective post season bowl games for fear of risking their NFL draft status due to injury, it got me thinking. I thought, “I finally get to talk about insurance and college football, namely Notre Dame football at the same time.” WIN/WIN!

While it has never been directly stated by either player, it’s hard to not think about what happened last year to Jaylon Smith, star linebacker from the University of Notre Dame, and consensus top 10 NFL draft pick in his final game, the Fiesta Bowl. I happened to be in the stands that day, watching my beloved Irish squad and saw the play that would forever alter the financial future of Mr. Smith. 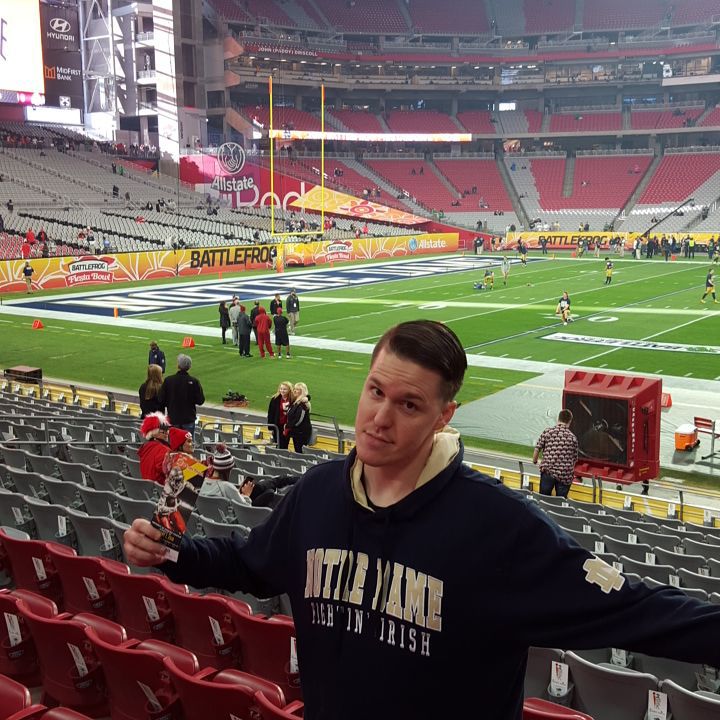 Before we talk about that (and believe me, I have much to say regarding Notre Dame football) Let’s rewind a few months earlier. Knowing he had a future in the NFL, the Indiana product took out a loss-of-value insurance policy. This policy would compensate him IF he were to get injured during his final season and having that injury effect his draft status.

After you got through some of the general underwriting, his policy was pretty straight forward, it would pay him $5 million if he got hurt and could never play again or up to $5 million if he got hurt and slipped in the 2016 NFL draft. Additionally, Smith would receive $700,000 if he fell out of the first round and got picked as the top pick in the second round. If he didn’t, he would collect an additional $100,000 for each spot he fell.

During the first half of the Fiesta Bowl, Smith suffered a severe knee injury. He tore his ACL and LCL ligaments, and was later discovered that he suffered severe nerve damage. The gruesome injury required Smith to undergo surgery, and as a result, it caused Smith’s draft stock to slip and fall. 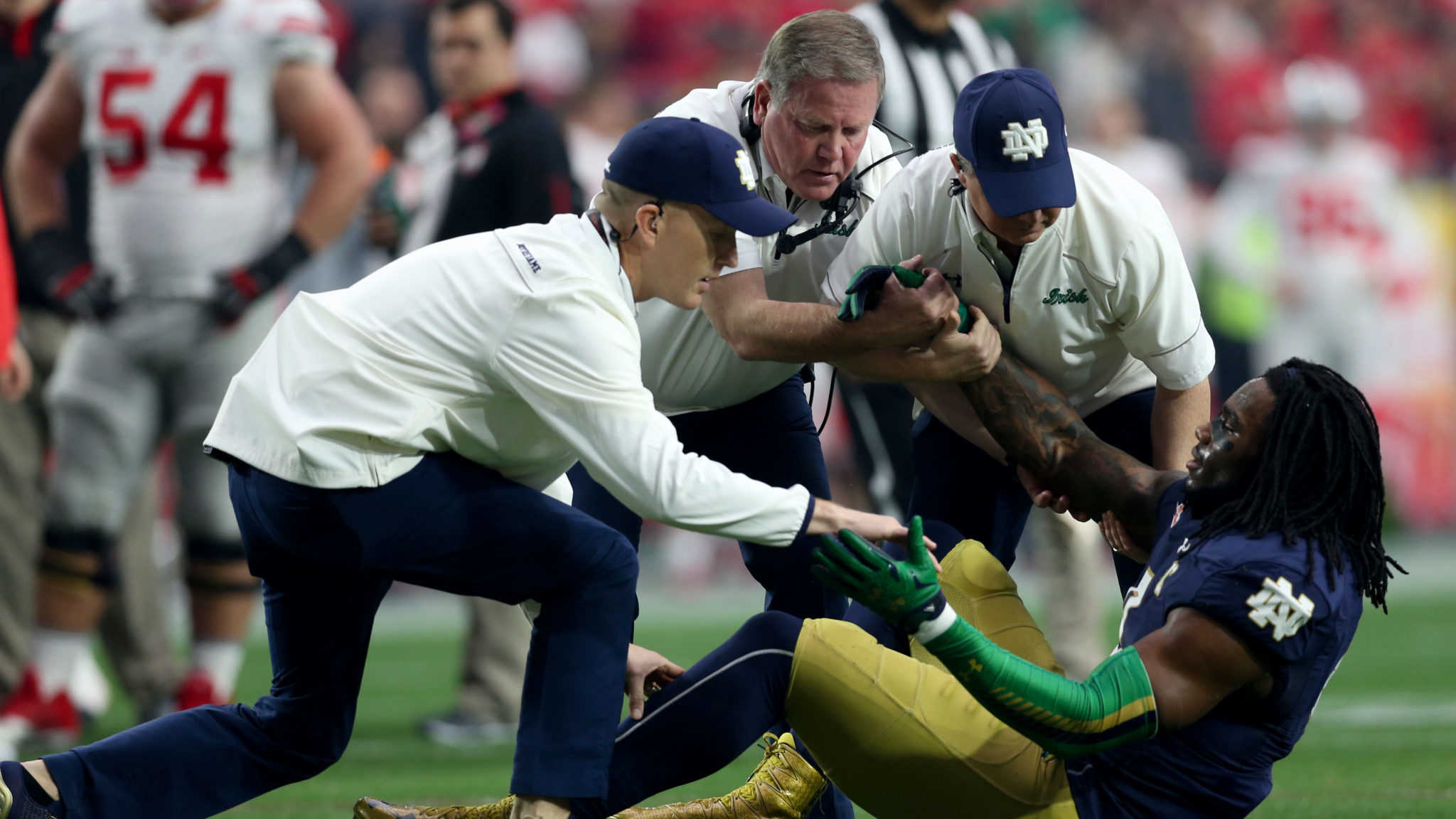 Luckily for him, the Dallas Cowboys rolled the dice and drafted Smith in the second round with the No. 34 overall selection. While no one knows for certain, it’s believed that Smith collected roughly $900,000 – a $4.1 million loss on the projected $5 million he would have received if he could never play again.

I have many opinions on this subject. I certainly see both sides of the argument, and have even flip flopped on my stance a little bit. On one hand, we’re talking about the opportunity to make generational wealth. Guys like Smith, Mccaffrey, and Fournette have a limited window of time to maximize their individual skill sets and make insane amounts of money. We’re not talking about a couple hundred thousand dollars, or even a couple million, we’re talking about money that is north of $20 million guaranteed contractual money. Money that if handled properly can change the entire family tree of these individuals.

On the other hand, you have coaches like Alabama’s Nick Saban (aka Satan in the flesh) who makes a valid point when he says:

But then he counters his own points by saying:

It’s true! I can think of players throughout the years who have elevated their draft status tremendously by how they played in their bowl game (see Jamarcus Russell) then either LOL, or cover your head in shame. 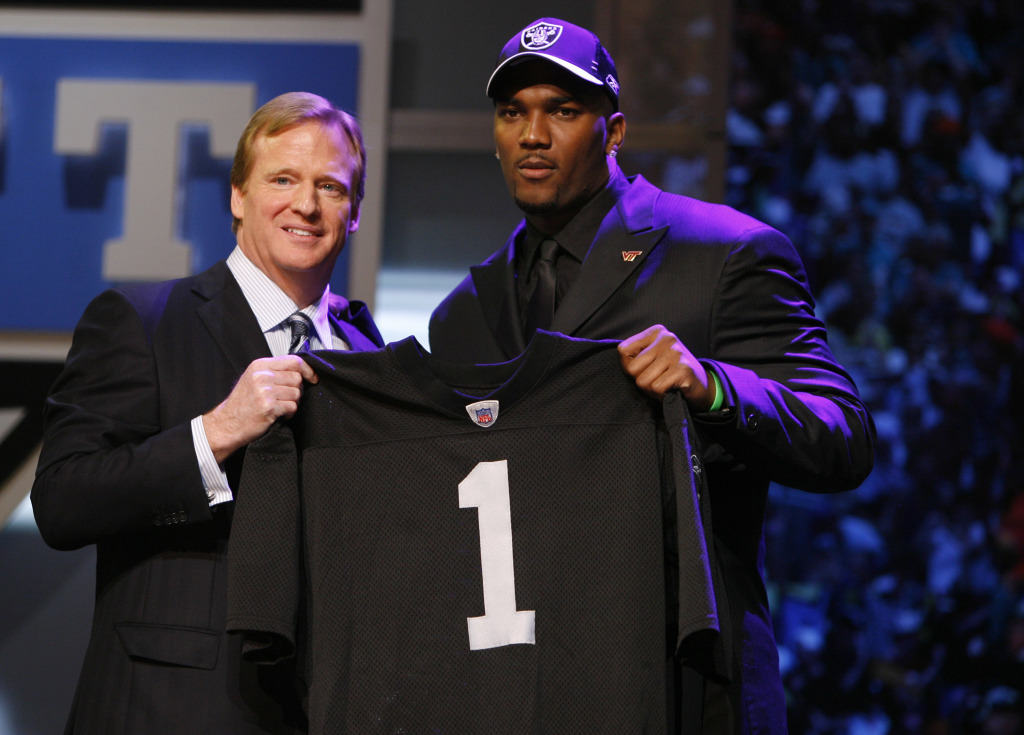 JaMarcus Russell, a quarterback from Louisiana State, stands with NFL Commissioner Roger Goodell after being selected by the Oakland Raiders as the No. 1 overall pick during the NFL Draft Saturday, April 28, 2007 at Radio City Music Hall in New York. (AP Photo/Jason DeCrow) ORG XMIT: NYFF110

So where do I stand? I would hope that a player plays. When my team is in any game, I hope to see every available player playing the game. I am a consumer looking to be entertained, while these are players who know the risks they take every time they put on a set of pads.

I hope to see more and more players taking advantage of a loss-of-value insurance policy. I would hope that universities would play an active role in encouraging players to protect themselves and their financial futures. These policies premiums range from $40,000 all the way to $100,000. Before you say “Nick, that’s a lot of money! How will a college student pay for that?” I would advise that the policy still be written and the premium financed. Financed premium will allow for the insured (the player) to make installment payments. Let’s also mention the obvious: If a player is drafted, he can then pay the policy in full. If he is injured, he then can collect on the premium. Either way, the player is making a considerable amount of money.

“$900,000 is a small amount of money compared to $30 million.” Yes, it sure is! Do you know what $900,000 is better than though? Zero dollars! Which is exactly how much money you risk when you do not properly take the steps needed to protect yourself.

It’s the same discussion and points of logic we make when we discuss insurance needs with everyone regardless if it’s a simple auto insurance policy, or a worker’s compensation and business insurance policy. The premiums can be high, depending on the risk, but while you’re frustrated with the fact that you’re paying $2000 a year for your auto insurance, understand that the insurance company itself is on the hook to pay out $100,000, $300,000, or $500,000 in the event that you hurt someone in an accident.

To find out more about i80 Insurance Solutions and why so many people are trusting our agency with their CA insurance needs, visit our reviews page, or allow us to offer you an insurance protection proposal for auto, home, life, or business insurance today

Call Email Change Quote
How Can We Serve You?
×
Send Message In App